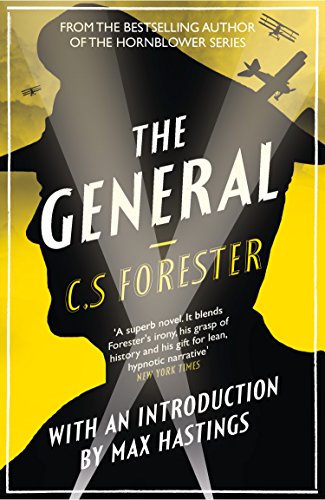 The most vivid, moving – and devastating – word-portrait of a World War One British commander ever written, here re-introduced by Max Hastings. Out of print for years, William Collins reissued the title to mark the centenary of the First World War in 2014, with a new foreword from Max Hastings, who considers The General to be the best portrait of British higher command in the Great War.

C.S. Forester’s 1936 masterpiece follows Lt General Herbert Curzon, who fumbled a fortuitous early step on the path to glory in the Boer War. 1914 finds him an honourable, decent, brave and wholly unimaginative colonel. Survival through the early slaughters in which so many fellow-officers perished then brings him rapid promotion. By 1916, he is a general in command of 100,000 British soldiers, whom he leads through the horrors of the Somme and Passchendaele, a position for which he is entirely unsuited and intellectually unprepared.

Wonderfully human with Forester’s droll relish for human folly on full display, this is the story of a man of his time who is anything but wicked, yet presides over appalling sacrifice and tragedy. In his awkwardness and his marriage to a Duke’s unlovely, unhappy daughter, Curzon embodies Forester’s full powers as a storyteller. His half-hero is patriotic, diligent, even courageous, driven by his sense of duty and refusal to yield to difficulties. But also powerfully damned is the same spirit which caused a hundred real-life British generals to serve as high priests at the bloodiest human sacrifice in the nation’s history. A masterful and insightful study about the perils of hubris and unquestioning duty in leadership, The General is a fable for our times.