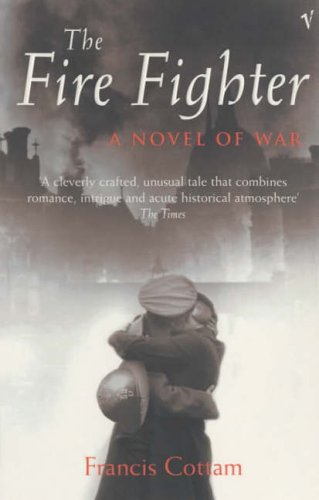 Set in WWII London, in the last months of 1940 when the Blitz and destruction and firebombing were at their worst and morale was at its lowest. A young man, Jack Finlay, is called back from the African front to mastermind the firefighting in a small but crucial area of the City of London, looking after 5 rather mysterious buildings in particular. In the pre-war period he was a legendary firefighter, though his past is rather murky – poor Liverpool Irish Catholic, sent to Borstal for fighting, and generally suspect because of his unnatural interest in fires, thought to be an arsonist. His father was a WWI hero – and one of the beautifully handled themes of the novel is the effect of that war on those who survived to fight another so soon after, and on their sons.

Our hero finds himself a pawn in an Intelligence game, and in British Intelligence’s attempts to feed false intelligence to the Germans at a crucial point in the war. He falls in love with a young woman who’s the curator of one of the buildings which was built by her German (disgraced) architect father – she to is being manipulated (or is she?) and the crisis comes when she is caught in the burning building. With its brilliantly vivid evocation of London in the Blitz, an unusual love story, an emotional heart but a cynical eye, and devastatingly good descriptions of fire (how it moves and works and destroys), this unusual and assured first novel has real appeal for men and women alike.