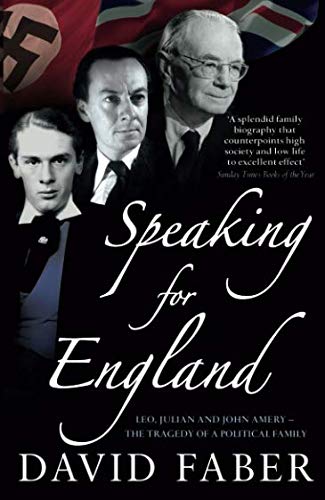 SPEAKING FOR ENGLAND is the extraordinary true story of an English political tragedy: the bizarre tale of how the son of a member of Churchill’s wartime Cabinet was hanged for treason — one of the last British citizens to suffer that fate.

John Amery had been born into a life of privilege, if not luxury — his father Leo was a prominent Conservative MP and minister, and his brother Julian also went on to a political career of his own. But John was always different, a troubled child who grew into a difficult and tortured adult, with a skewed sense of patriotism leading him not just to a series of broadcasts on behalf of the Germans during the Second World War, but also to an attempt to recruit a ‘Legion of St George’ to take up arms against the Russians. These and other charges resulted in his conviction for treason, and execution.

It is the irony and tragedy of the Amery family that John’s sense of duty, although channeled in a different direction, was as strong as that of his father, who had been instrumental in bringing about Chamberlain’s downfall after the Munich crisis, not least in his famous exhortation in the House of Commons to ‘Speak for England!’

Focusing on the fascinating lives of this father and his two sons, and how they were affected by John’s inexorable demise, David Faber has constructed a riveting and deeply moving account of the tragedy of an English political family. Blending biography, history and taut narrative with tremendous skill, he has shed new light on both an extraordinary human story and the society that witnessed it.