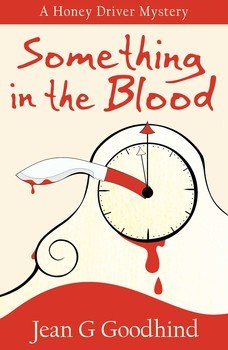 Something in the Blood

Something in the Blood – Book One in the Honey Driver Mysteries

Honey Driver runs a hotel in Bath. She also collects antique underwear. As her own boss, she’s in charge one day and washing dishes the next, resisting her mother’s match-making attempts and managing multiple responsibilities – mundane, safe, and unexciting.

Then one day things change.

Honey lands the job of liaising with the police on behalf of Bath Hotels Association. No worries, she tells herself. Nothing will happen; then an American tourist goes missing and Honey is called in to help. Despite the on/off hostility of her police opposite number, D C I Steve Doherty, she sticks to the task. In the process Honey finds out that there’s more to work than washing dishes, and more to murder than malice aforethought.

‘Honey’s earnest, charming quirkiness, her sometimes ribald humor, the zingy ripostes that pepper the dialogue, and the detailed descriptions of one of England’s loveliest cities will appeal to ardent Anglophiles and British cozy fans alike.’ Booklist (USA)