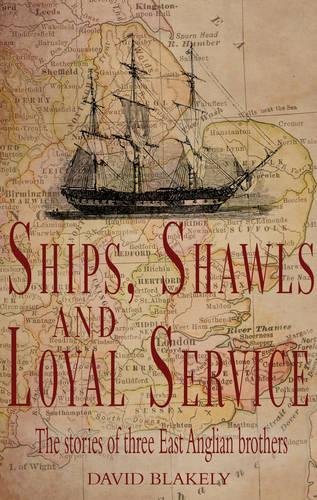 Ships, Shawls and Loyal Service details the history of three 19th century brothers, each of whom saw some success in his chosen occupation, but each quite distinct from the others in what he achieved.

Inspired by the extensive family tree drawn up in the early 20th century by one of his great-uncles, David Blakely relates the stories of his three ancestors. With strong roots in rural Suffolk, the three Blakely brothers were born at the end of the 18th century into a long-established family. Their ancestors had been gentlemen farmers, but none of the brothers followed that occupation. The eldest spent a year as a midshipman in the Royal Navy and six years as an officer in the Army, before becoming involved in a rural church community in north Norfolk. The second served as an officer on East India Company ships, sailing to India and China and finally being promoted to captain. The youngest brother lived in Norwich and became a well-respected retailer and manufacturer in the textile trade.

Ships, Shawls and Loyal Service is a fascinating insight into the lives of three brothers, each of whom took a very different path in life. Early history of the brothers’ family is also explored, including their grandfather’s business as proprietor of a stage-coach company in Ipswich and his acquaintance with the artist Thomas Gainsborough.

This book will appeal to those interested in East Anglian life and trade in the 18th and 19th centuries. Readers interested in naval and military actions in Napoleonic times and in sailing between England and the Far East will also find this a valuable account.