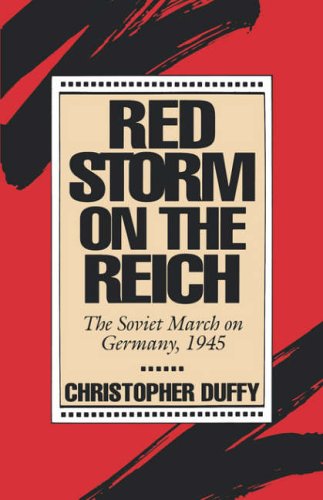 Red Storm On The Reich: The Soviet March On Germany, 1945

On the night of January 11, 1945, fog, low clouds, and blizzards reduced visibility at times to literally zero along the Sandomierz bridgehead. So the German troops did not notice tanks, assault guns, and towed artillery pieces moving in position by the thousands along the east bank–the Russian side–of the Vistula River. Within seconds after the order to fire was given by the Soviet commander, General Konev, the air became incandescent with unnatural light. A sky of fire and smoke lowered over the country across the river: Houses flared up like torches, bunkers collapsed, roads were broken up, and men were ripped apart. The ferocity of the first attack shook the Germans so badly that they thought they were dealing with the main assault, and not just a reconnaissance in force. So they were completely unprepared for the principal attack and the horrors it held. Thus began the Red Storm on the Reich–the largest, costliest, and fastest–moving military operation in European history.

“Essentially, the Second World War was won and lost on the Eastern Front,” writes renowned historian Christopher Duffy. Until this book, however, the most dramatic events surrounding this part of the war have been little understood. Utilizing a wealth of recently released Soviet materials from Moscow archives, and cross-referencing these with German accounts, Duffy has uncovered a military campaign of unprecedented scale and intensity during which thirty million lives were lost. Red Storm on the Reich brings to life not only the Russian military assault on Germany, but also the human drama behind the epic sieges of Danzig, Kolberg, and Breslau. Duffy’s gripping narrative is essential reading for all those interested in modern European history.