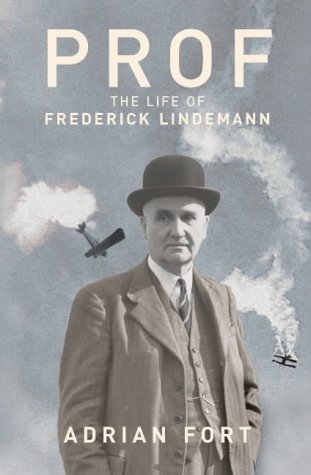 Prof: The Life and Times of Frederick Lindemann

Frederick Lindemann, Viscount Cherwell, is one of the most influential yet least known figures of the twentieth century.

Born in 1886 into a rich family of German origin, he became Winston Churchill’s scientific adviser and close friend and reached the very pinnacle of political, scientific and social life in Britain. Lindemann – or ‘Prof’ as he was widely known – was raised in Devonshire and educated in Berlin and Paris. A gifted musician and sportsman, as a young man he played tennis against both the Kaiser and the Czar. He went on to become one of the world’s leading figures in science’s heroic age.

He championed and befriended Einstein. He repeatedly risked his own life – and saved many others – in demonstrating how to escape from aeroplane spin. And, between the wars, he established almost from scratch Oxford University’s international reputation in physics.

During the 1930s Lindemann campaigned strenuously against appeasement and moved to the centre of policy-making when he joined the Cabinet. He was described by R. A. Butler as ‘that sharp-witted, sharp-tongued, pertinacious and more than slightly conspiratorial character who has long been Churchill’s closest friend and confidant’. As such, he advised on all the central issues of the war, including the U-boat threat, the bombing of Germany, the V-weapon peril and the creation of the atom bomb. Frederick Lindemann’s private life was a closed book. His arrogant wit and supreme confidence in his own judgement brought him many enemies. But no other scientist in history has achieved more political power. His remarkable contribution in both spheres remains unparalleled.