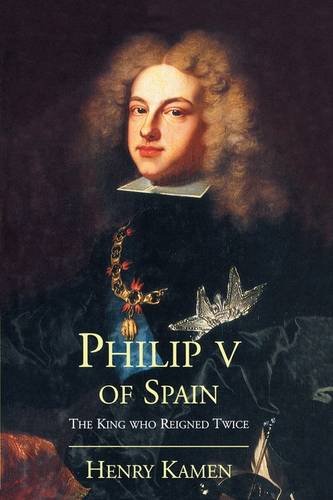 Philip V of Spain: The King Who Reigned Twice

Philip V, who reluctantly assumed the Spanish throne in 1700, was the first of the Bourbon dynasty which continues to rule Spain today. His 46-year reign, briefly curtailed in 1724 when he abdicated in favour of his short-lived son, Louis I, was one of the most important in the country’s history. This highly readable account is the first biography of Philip V in English.

Previous writing on Philip has been largely negative, dismissing him as comic, stupid and indolent. Henry Kamen demonstrates here, however, that the king initiated significant developments in politics, imperial policy, finance, government and military affairs that laid the basis of the modern Spanish state. Philip also encouraged literature, the creative arts and music in ways that brought Spanish culture closer in touch with the rest of Europe, and he dealt authoritatively with issues concerning the autonomy of the provinces of Spain and the role of the monarchy itself.

Drawing on contemporary opinion and fresh archival sources, Kamen discusses Philip’s character, decisions and policies. He offers a new assessment of the king’s illness (which led earlier historians to view Philip as mad) and re-evaluates the role of his two wives. Kamen’s account of Philip as king also provides an essential introduction to the study of early eighteenth-century Spain and the Bourbon monarchy.

Henry Kamen is Professor of the Higher Council for Scientific Research in Barcelona. He has held posts at several universities in Britain and the United States, most recently as visiting professor at the University of Chicago. He is the author of many books on European and Spanish history, including ‘Philip of Spain’, ‘The Spanish Inquisition’, and ‘The Phoenix and the Flame: Catalonia and the Counter Reformation’, all published by Yale University Press.