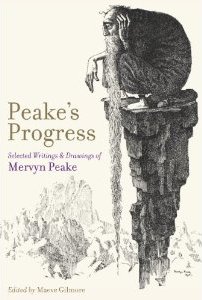 Mervyn Peake (1911-1968) the immensely talented writer, artist, poet and playwright, is best-known for his gothic masterpiece, the Gormenghast trilogy, and his stunning illustrations for Alice in Wonderland and Alice through the Looking Glass. He was a prolific and astonishingly original writer, who touched at one time or another on almost every literary form. Peake’s Progress is a selection, compiled by his widow, Maeve Gilmore, from every period of his work as writer and draughtsman.

It contains a remarkable work from childhood, ‘The White Chief of the Umzimbooboo Kaffirs’, the early ‘Mr. Slaughterboard’, which foreshadows the ‘Titus’ books, two plays, ‘The Wit to Woo’ and ‘Noah’s Ark’, a broadcast version of ‘Mr Pye’, and a generous selection from Peake’s short stories, poems and nonsense verses as well as from his drawings. Including a new introduction written by Mervyn Peake’s son, Sebastian, this edition of Peake’s Progress is published to coincide with the centenary of Peake’s birth, and to mark the British Library’s acquisition of Peake’s archives.