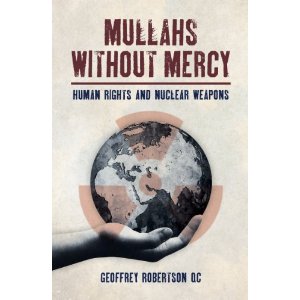 What is worse: Iran getting the bomb or the US bombing Iran? Will our children ever live in a world without nukes? Can states that mass-murder their own people be trusted with a weapon that mass-murders? Will a nuclear explosion change the climate before climate change does?

In Mullahs Without Mercy, Geoffrey Robertson explores these and other awesome questions that arise from Iran’ s potential for acquiring the bomb. The scramble for nuclear weapons by brutal or unstable regimes poses the clearest present danger to the peace and the climate of the world. This groundbreaking study exposes Iran s crimes against prisoners and dissidents, perpetrated by the very same mullahs who may soon have their fingers on nuclear triggers. But it argues that the US has no legal right to attack, as Israel hypocritically hiding its own nuclear arsenal demands. In this vividly written and authoritative book, one of Britain’s highest-profile legal minds shows how the mushroom cloud hovering over the Middle East might yet have a silver lining forcing the world to reassert the rule of international law, which could lead to the elimination of a weapon with the power to destroy us all. This disturbing book explores the options that face the world as it stumbles, like a sleepwalker, into the perils of a new nuclear age. Fearsome weapons of mass destruction are mixed in a witch’s cauldron with religious fanaticism, blind cruelty and unbending national pride.

“A well-timed and unsettling analysis of an unfolding crisis.” – The Honourable Michael Kirby CMG, former president of the International Commission of Jurists.