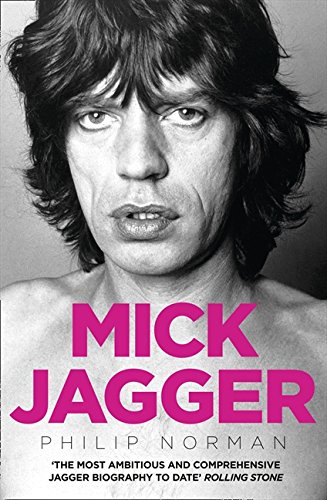 A miracle of still-plentiful hair, raw sex-appeal, and strutting talent . The frontman of one of the most influential and controversial groups of all time. A musical genius with a career spanning over four decades. He is a testament to British glamour, the ultimate architect and demi-god of rock.

Bestselling biographer Philip Norman offers an unparalleled account of the life of a living legend, Mick Jagger. From Home Counties schoolboy, to rebel without a cause to Sixties rock sensation and global idol, Norman unravels with astonishing intimacy the myth of the inimitable frontman of The Rolling Stones. MICK JAGGER charts his extraordinary journey through scandal-ridden conspiracy, infamous prison spell, hordes of female admirers and a knighthood while stripping away the colossal fame, wealth and idolatry to reveal a story of talent and promise unfulfilled.

Understated yet ostentatious; the ultimate incarnation of modern man’s favourite fantasy: ‘sex, drugs and rock ‘n’ roll’, yet blessed with taste and intelligence; a social chameleon who couldn’t blend in if he tried; always moving with the Jagger swagger yet modest enough to be self-deprecating, Mick was a paradoxical energy that reconfigured the musical landscape.

This revelatory tour de force is ample tribute to a flawed genius, a Casanova, an Antichrist and a god who, with characteristic nonchalance realised the dreams of thousands of current contenders and rocker pretenders, longevity, while coasting on a sea of fur rugs.