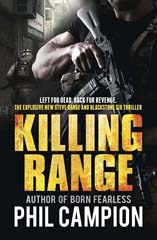 Steve Range believes his friend Randy is a corpse in a desert grave – until he reappears in an Al Qaeda video, spitting extremist hate and challenging Range and Blackstone Six to a desert battle that will settle a vicious blood feud.

But Range’s attention is drawn to a clue slipped in to Randy’s tirade, and he begins to wonder whether his old comrade-in-arms really has been turned by his captors. All he knows for sure is that he owes a debt to the man he left for dead.

Range leads a team from Blackstone Six on a high-stakes rescue mission, but he soon finds that his elite band of operators are facing a desperate fight like no other, one in which old loyalties and friendships will be tested to the limit and beyond.