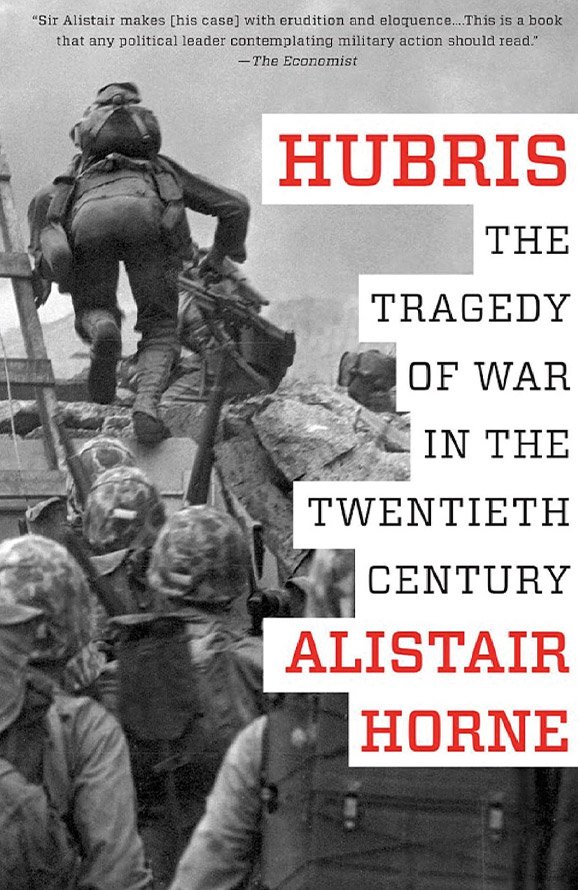 Hubris: The Tragedy of War in the Twentieth Century

Hubris: The Tragedy of War in the Twentieth Century

Alistair Horne has been a close observer of war and history for more than fifty years. In this wise and masterly work, he revisits six battles that changed the course of the twentieth century and reveals the one trait that links them all: hubris.
In Greek tragedy, hubris is excessive human pride that challenges the gods and ultimately leads to total destruction of the offender. From the Battle of Tsushima in the Russo-Japanese War of 1905 to Hitler’s 1941 bid to capture Moscow, and from the disastrous American advance in Korea to the French surrender at Dien Bien Phu, Horne shows how each of these battles was won or lost due to excessive hubris on one side or the other.
In a sweeping narrative written with his trademark erudition and wit, Horne provides a meticulously detailed analysis of the ground manoeuvres employed by the opposing armies in each battle. He also examines the strategies, leadership, preparation and geopolitical goals of aggressors and defenders, to show how devastating combinations of human ambition and arrogance led to overreach. Making clear the danger of hubris in warfare, his insights hold resonant lessons for civilian and military leaders navigating today’s complex global landscape.
A dramatic, colourful and stylishly written history, HUBRIS is an essential reflection on war from a master of his field.

‘Like a good Bordeaux, and unlike a good mathematician, a good historian improves with age. This is Alistair Horne’s 25th book and it is filled with the insights that can come only from a lifetime of studying war. From Tsushima to Dien Bien Phu, he relates five of the decisive military encounters of the twentieth century — interestingly, all but one of them fought in Asia. Hubris is his title and his leitmotif — more precisely, the over-confidence that so often leads to military disaster. But there is no hubris in the author himself, who approaches the challenges of writing about Oriental conflicts with a due humility, as well as his customary literary skill.” — Niall Ferguson

‘The ancient Greeks used the word ‘hubris’ to describe.. the arrogant belief that man could challenge the gods and survive… Horne uses this sobering reflection to illuminate the history of war in the first half of the 20th century, which he does with the elegant readability and sharp insight familiar from his long career.’ — Richard Overy, Sunday Telegraph
‘I can think of no one better to tackle the daunting subject of hubris and the punishments that so often follow than Alistair Horne. He brings the necessary wisdom, vast knowledge of the past and understanding of human nature to show the effects of hubris in modern warfare. In his masterly and confident hands, we are shown how victory whether that of the Japanese navy at Tsushima in 1905 or General MacArthur’s in the first stages of the Korean War leads all too commonly to complacency and then disaster. A wonderful read.’ — Margaret MacMillan
‘In this well written, deeply researched, and persuasively argued book, Horne, the venerable British military historian, looks at six critical battles of the 20th century, focusing on what he argues is a constant that links all of them: the hubristic arrogance exhibited by those on the losing end. In military history, the word hubris is most often used to explain one of the primary flaws of American Vietnam War policymakers, but Horne looks across the 50 years that preceded that engagement … Horne convincingly argues that “infection by hubris” is alive and well today, and he rounds out the work by discussing ways that 21st-century leaders can work to avoid it’ — Publishers Weekly
PUBLISHER: Weidenfeld & Nicolson
PUBLICATION DATE: 3rd September 2015