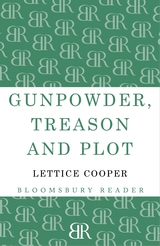 On the fifth of November every year, children all over England delightedly light bonfires, swish sparklers and gobble toffee apples in celebration of Bonfire Night, and the death of Guy Fawkes.But what really happened on the night of the Fifth of November, 1605, when the plot to blow up King and Parliament was discovered? And what led up to so extreme a course of action?

It is a story of intrigue, unsurpassed even in a century when intrigues were commonplace, and of religious zeal reaching fanatical proportions. Lettice Cooper has told the true story of this whole fantastic episode – an episode which has captured and held the imagination of English people for hundreds of years. She has added nothing but her brilliant writing. The story was there – in abundance.