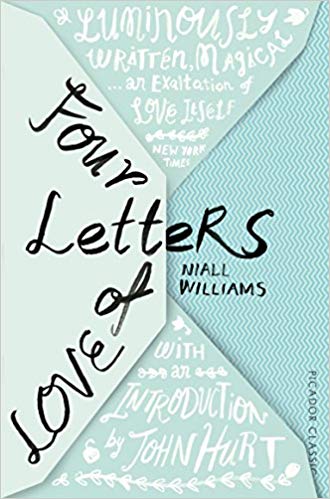 A classic love story and a seminal work of Irish literature that is a testament to romance, magic and the power of true love.

In love everything changes, and continues changing all the time. There is no stillness, no stopped clock of the heart in which the moment of happiness holds forever, but only the constant whirring forward motion of desire and need. . .

Nicholas Coughlan and Isabel Gore are meant for each other – they just don’t know it yet. Though each has found both heartache and joy in the wild Irish landscape, their paths are yet to cross. But as God, ghosts, fate and the sheer power of true love pull Nicholas and Isabel together, so too does life threaten to tear them apart. . .

Magical, lyrical and deeply romantic, Niall Williams’ Four Letters of Love moved readers the world over and became an international bestseller. It is a life-affirming paean to human folly, to fate, and to the miracle of love.

A joy, an acutely evocative and sexual story . . . my God I couldn’t put it down (Marianne Faithfull)

A lyrical and passionate novel shot through with the belief in divine order versus chaos; the belief in destiny and the demonic fight against it, and, in spite of all the evidence that life is cruel and arbitrary, the presence of the supernatural and the manifestation of miracles (Observer)

This book can rightly claim its place among the classics of Irish literature. A wonderfully affecting love story (Belfast Telegraph)

A delicate and graceful love story that is also an exaltation of love itself . . . a luminously written, magical work of fiction . . . Extraordinarily rooted in the Irish language and landscape . . . Yet in its serious fancifulness, its feverish intensities, Four Letters of Love also gives us Niall Williams’s own Ireland, a place devoted to the belief in miracles and the obsessive power of love (New York Times)