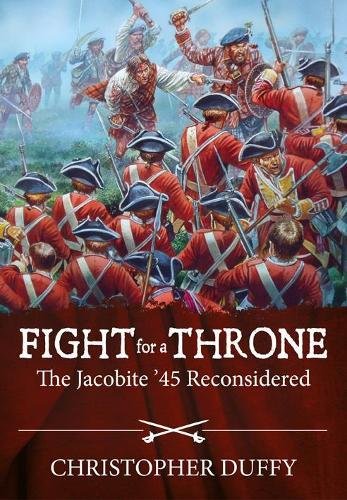 Fight for a Throne: The Jacobite ’45 Reconsidered

The bid of Bonnie Prince Charlie and his Jacobites for the throne of Britain has never lost its grip on the popular imagination. In July 1745 he and a tiny group of companions arrived in Scotland. They came unannounced and unsupported, and yet within less than five months Charles was able to lead an army to within marching distance of London and make King George II fear for this throne.

Afterwards the Highland Army continued to out-fight the redcoats in every encounter, except its very last. These were not the achievements of a backward-looking cause, and this ground-breaking study is the first to explain exactly why.

Almost to the very end the Jacobites had the literal and metaphorical ‘edge’ over their enemies, thanks to the terror-inspiring highland charge, and also, as this book is the first to reveal, to the highly-advanced organisation of their forces in ‘divisions’ – miniature armies that allowed them to out-manoeuvre their enemies on the strategic plane.

At the same time Prince Charles made a credible bid for the political and ideological high ground, an appeal based on religious toleration, and a monarchy working in cooperation with an empowered and accountable Parliament. The Prince therefore not only drew on traditional loyalties, but attracted the support of heavyweights of the new ‘Enlightenment’. It all made a telling contrast to the demeaning nature of the Hanoverian government in Britain, which was mired deep in corruption.

The Hanoverian politicians in London and Scotland, who had honed their skills in petty advantage, were now all of a sudden called upon to act as strategists, and they failed completely. The prime minister lost the Carlisle to the Jacobites simply because he refused to pay the cost of a courier. These revelations, which show the Jacobite enterprise of 1745 as a potent and modernising force, turn the accepted interpretation of this episode on its head.