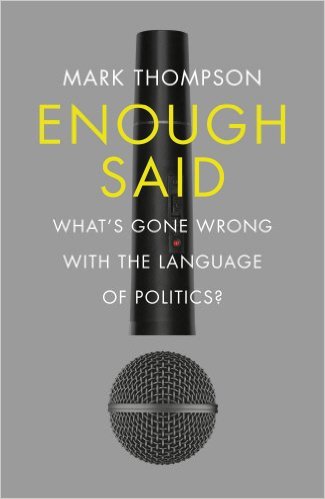 Enough Said: What’s Gone Wrong with the Language of Politics?

In the twentieth century, the biggest threat facing public language seemed to be state censorship and control. Instead we find ourselves living in the era not of Newspeak but of Twitter and YouTube – an era of radical freedom of expression. We have never had more access to information or more opportunity to debate the issues of the day. So why has this revolution failed to live up to its promise?

Enough Said will argue that more than party or ideology, changes in public language that are to blame for the division and paralysis in our democracies.

Featuring Sarah Palin and the Tea Party, George Osborne and Ed Balls, Fox News, Silvio Berlusconi, Vladimir Putin and many more, Enough Said shows how language is losing its power to explain and connect, how an ominous gap is opening up across the West between the governed and those that govern, and explains what we must do to put that right.

“[A] superb book… Thompson’s own experience in the media is brilliantly deployed throughout for insight… Thompson is a sharp and entertaining analyst of political language itself.” – Guardian