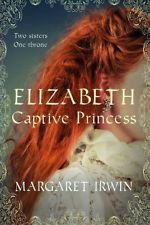 July, 1553. Sibling rivalry has never been more tumultuous and perilous than between the daughters of King Henry VIII. Queen Mary Tudor has just won possession of the throne, but her younger half-sister – the beautiful and vivacious Princess Elizabeth – holds the hearts of the people. Knowing this, Mary banishes her sibling to a country retreat, determined to keep her as far away from court life and any powerful supporters she has there as possible. But Mary’s health is fading fast and her power beginning to crumble. The people of England are crying out for a new monarch and it seems, at last, they may have their wish and crown their beloved Bess as queen.

But Mary refuses to relinquish the throne, determined to rule to the absolute end as her father did before her. In a final show of strength, Mary orders Elizabeth’s imprisonment in the Tower of London, there to await her execution. In these treacherous times, when all about her there is secrecy and deception, Elizabeth must rely on her faith and courage if she is to survive her ordeal and rise to fulfill her destiny.