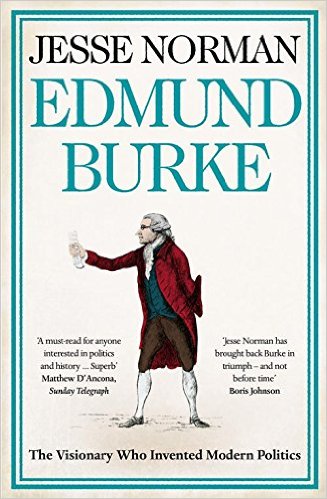 Longlisted for the Orwell Prize and the Samuel Johnson prize for non-fiction.

Philosopher, statesman, and founder of modern conservatism, Edmund Burke is both the greatest and most under-rated political thinker of the past three-hundred years. Born in Ireland in 1729, and greatly affected by its bigotry and extremes, his career constituted a lifelong struggle against the abuse of power.

In this absorbing new biography, Conservative MP Jesse Norman gives us Burke anew, vividly depicting his dazzling intellect, imagination and empathy against the rich tapestry of 18th century Europe. Burke’s wisdom, Norman shows, applies well beyond the times of empire to the conventional democratic politics practised in Britain and America today. We cannot understand the defects of the modern world, or modern politics, without him.

“Jesse Norman has brought back Burke in triumph. Anyone who cares about politics will pounce on this book and devour it” –  Boris Johnson

“A must-read for anyone interested in politics and history … Superb” –  Matthew D’Ancona, Sunday Telegraph

“His new book on Edmund Burke seeks to contest the very nature of today’s Tory Party. All power to his elbow … quite brilliantly, Norman … [offers] an immense critique of the present … It is a patriotic tract and an act of great leadership. This is a very significant book” – Independent