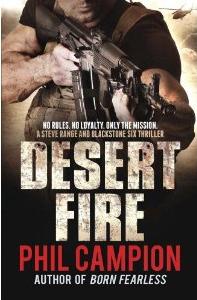 Sultan Gadaffi has escaped from Libya with a fistful of dangerous secrets. The British Government want ex-Special Forces operative Steve Range, the go-to man for any Black-Ops missions, to lead an ultra-covert mercenary group to seize him from his near-impregnable desert stronghold. Saed is defended by Tuareg warriors armed to the teeth with stolen NATO hardware. If Range’s team can somehow overcome them, then they will earn themselves gold bullion worth $500 million. But as the bullets begin to fly and the body count rises, Range realises that he’s been double-crossed. Unwilling to lose the gold, he begins to contemplate cutting a deal with the devil.

“A cracking read … The bangy shooty bits are as good as it gets … I look forward to Big Phil’s next book” –  ARRSE. (ARRSE)