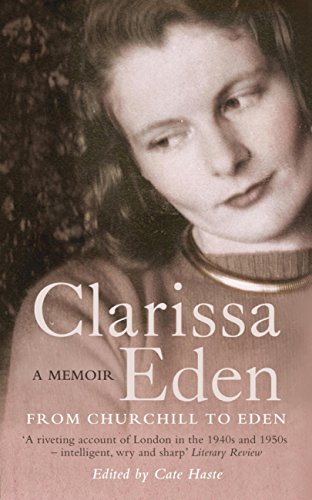 Clarissa Eden: A Memoir – From Churchill to Eden

In 1955, at the astonishingly young age of 34, Clarissa Eden entered No. 10 Downing Street as the wife of the new Prime Minister, Anthony Eden.

Born Clarissa Churchill in 1920, her uncle was the great Winston, and when she married the 55-year-old Eden, then Foreign Secretary, at Caxton Hall register office in 1952, there were crowds as big as the gathering that had cheered Elizabeth Taylor and Michael Wilding’s wedding there six months earlier.

A renowned beauty, she was at home with her mother’s Liberal intellectual circle, and mixed in her youth with the pillars of Oxford’s academic community – Isaiah Berlin, Maurice Bowra and David Cecil among them: according to Antonia Fraser, she was ‘the don’s delight because she was beautiful and extremely intellectual’. Her close circle of friends included some of the leading cultural figures of the twentieth century: Cecil Beaton, Evelyn Waugh, Orson Welles among them. Her observations and insights into these men and their world provide a unique window into the mid 20th century. As the spouse of the most important man in Britain, the hostess at No. 10 and Chequers, Clarissa Eden was inevitably privy to a multitude of top-level secrets. The Suez crisis and Eden’s ill health meant that she shared just four years of Anthony’s political life and eighteen months as Prime Minister’s wife.

This individual, discriminating and honest memoir is her first account of extraordinary times, intuitively edited by Cate Haste, co-author of The Goldfish Bowl.