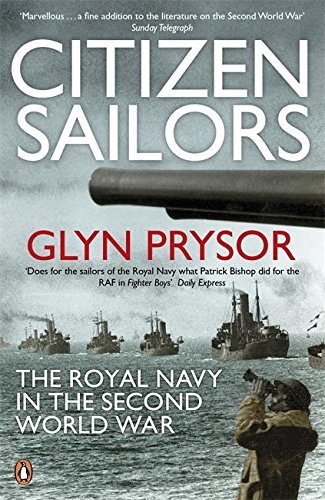 Citizen Sailors: The Royal Navy in the Second World War

‘The deck and the bridge were pointing to the sky at an alarming angle and our thoughts were to get the devil out of it and into the water. Almost in unison we shouted “for God’s sake jump boys”.’

Citizen Sailors is a groundbreaking people’s history of the Royal Navy in the Second World War. Drawing on hundreds of contemporary diaries and letters, along with memoirs, oral history and official documents, Glyn Prysor tells the human story of Britain’s war at sea.

The sailors of the Royal Navy fought from the very first day of the war until the very last. They played a vital part in a truly global war, from America to Australia and from the Arctic to South Africa. They fought in every conceivable vessel: vast aircraft carriers and cramped corvettes, fast motor boats and rickety minesweepers, Swordfish biplanes and ageing submarines.

Seen through the eyes of sailors themselves, this is a compelling account of life in the wartime Royal Navy: humanity and horror, triumphs and tragedies, nerve-wracking convoys and epic gun battles, devastating aerial bombardment and swashbuckling amphibious landings. Citizen Sailors puts the Royal Navy and its sailors back at the heart of the story of Britain’s Second World War.