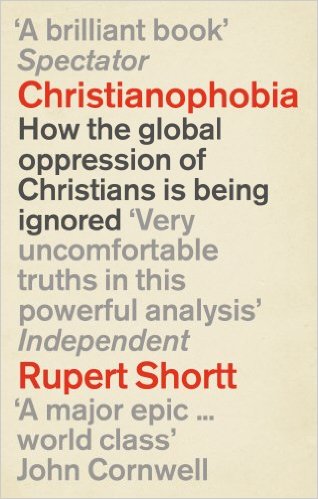 The aim of this book is twofold: One is to counter the huge weight of column inches being spent on the perceived, and actual, persecution of Islam. The second is to turn up the volume on the side of Christians rather than Atheists (a position which has been underpinned so vociferously by Dawkins et al in recent times).

In fact there have been – and still are – many terrible stories of murder, oppression and persecution of Christians around the world, in East Timor, Burma, Egypt, China, Iran, and many other countries. The reason we don’t hear much about them, says the author, is the fear of giving offence; the fact young Christians don’t become radicalised; and persecuted Christians tend not to respond with violence. Yet Christians are persecuted in greater numbers than any other global religious body, and this fact is severely under-recognised.

It looks likely interfaith relations will be a major challenge of the 21st century, and harmony between religions is looking pretty remote. Why are faiths now so associated with violent conflict? Why has the communications revolution had a deeper impact on Islam than on Christianity? Why is there a tendency to associate Christianity with the West, and with overt/covert forms of colonialism? Just how insular and prejudiced are we in the West about Christians abroad?