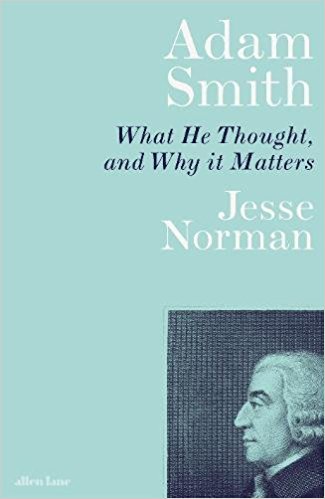 Adam Smith: What He Thought, and Why it Matters

Adam Smith is now widely regarded as ‘the father of modern economics’ and the most influential economist who ever lived. But what he really thought, and what the implications of his ideas are, remain fiercely contested. Was he an eloquent advocate of capitalism and the freedom of the individual? Or a prime mover of ‘market fundamentalism’ and an apologist for inequality and human selfishness? Or something else entirely? Jesse Norman’s brilliantly conceived book gives us not just Smith’s economics, but his vastly wider intellectual project. Against the turbulent backdrop of Enlightenment Scotland, it lays out a succinct and highly engaging account of Smith’s life and times, reviews his work as a whole and traces his influence over the past two centuries.

This book dispels the myths and debunks the caricatures that have grown up around Adam Smith. It explores Smith’s ideas in detail, from ethics to law to economics and government, and the impact of those ideas on thinkers as diverse as Karl Marx, Charles Darwin, John Maynard Keynes and Friedrich Hayek. Far from being simply an economist, Adam Smith emerges as one of the founders of modern social psychology and behavioural theory. Far from being a doctrinaire ‘libertarian’ or ‘neoliberal’ thinker, he offers a strikingly modern evolutionary theory of political economy, which recognises the often complementary roles of markets and the state.

At a time when economics and politics are ever more polarized between left and right, this book, by offering a Smithian analysis of contemporary markets, predatory capitalism and the 2008 financial crash, returns us to first principles and shows how the lost centre of modern public debate can be recreated. Through Smith’s work, it addresses crucial issues of inequality, human dignity and exploitation; and it provides a compelling explanation of why he remains central to any attempt to defend, reform or renew the market system.

“In this splendid book, Jesse Norman not only presents an excellent introduction to the life and ideas of Adam Smith, but also explains why – and how – Smith’s insights can help us solve some of the most difficult social and economic problems of the contemporary world. Smith loved lucidity and relevance, and I think he would have been very happy with Norman’s book.” – Amartya Sen

“The book is lucid, comprehensive and sympathetic. He defends Smith from his detractors, and even more importantly, rescues him from his most zealous, and therefore mistaken, admirers.” – Scotsman